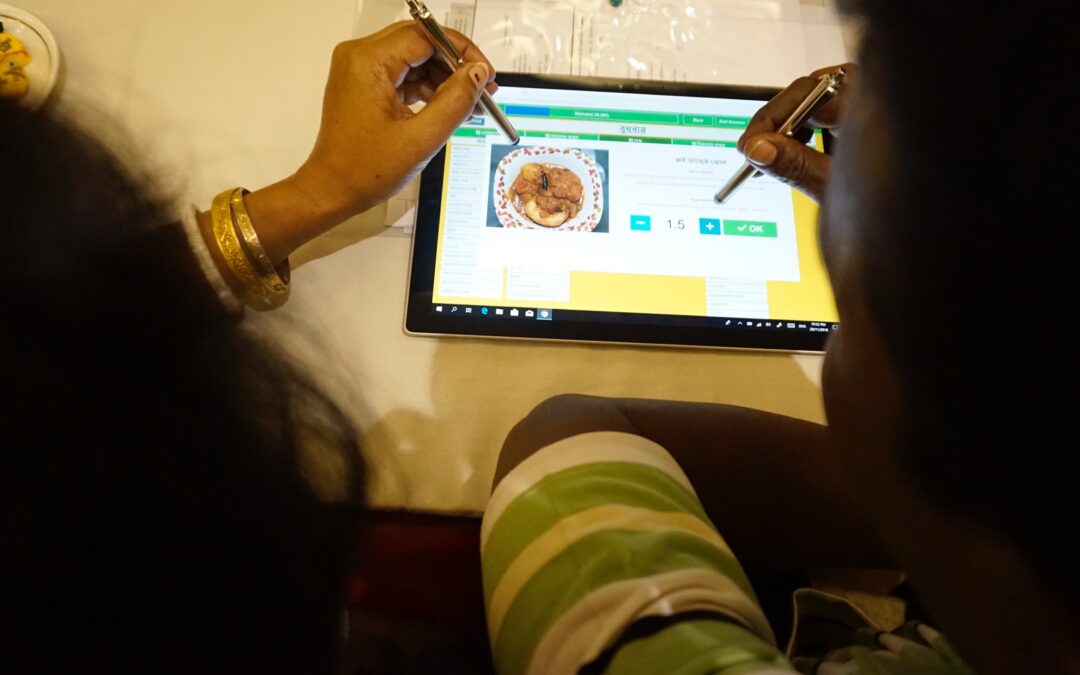 India is home to nearly one-fifth of the world’s population (Dandona et al., 2017). As the country continues to undergo rapid economic expansion and urbanization, markets have drastically changed the availability, quantity, and quality of food choices for India’s rising population. This transformation is occurring in both urban and rural settings (Javalgi & Grossman, 2016; Popkin, 2003). It is widely believed that India’s booming middle class, with significantly higher financial resources than in the past three decades, is driving the nutrition transition and increased popularity and consumption of Westernized diets (Javalgi & Grossman, 2016; McKinsey and Company, 2007; Monteiro, Moura, Conde, & Popkin, 2004; Popkin, Adair, & Ng, 2012).

A Drivers of Food Choice project entitled ‘Behavioral Drivers of Food Choice in Eastern India,’ led by the International Rice Research Institute (IRRI), used a mixed-methods study design to identify entry points for nutrition-sensitive interventions targeted to low and middle income households from urban and rural districts in the eastern Indian states of West Bengal and Odisha. A series of activities were conducted starting with expert elicitation workshops with food experts to map the diversity of dishes and define the eating occasions in the two States. The results were then validated with consumers through focus group discussions and household surveys. The household surveys were also designed to capture the current consumption habits and their attitudes towards the different dimensions of food (e.g., nutritional benefits, suitability, children’s preferences, aroma, digestibility, tradition). The study team used results from these activities to develop an interactive tablet application, called the “Food Choice Application” (FCA), which they used in a series of behavioral experiments to test how to nudge the households towards healthier diets. In these experiments, households (i.e., husband and wife) were asked to plan their weekly meals using the FCA. They were first asked to plan their household’s meals individually and then jointly (IRRI, 2018).  The FCA was launched in West Bengal and a total of 14 experiment sessions comprising 192 households (192 husbands and 190 wives) were conducted in a central location set-up in Kolkata and Siliguri from 28 November to 7 December 2018. These households came from 28 urban districts in Kolkata and 8 rural districts in West Bengal, covering 25 villages.

One of the key objectives of the FCA is to capture—as realistically as possible—how households make trade-offs in food expenditures under varying scenarios of income shocks. The app randomly assigns a budget to each household within which the household members have to work in planning their weekly meals. These budgets were randomly drawn from the food expenditure budgets obtained from the previous consumer surveys. This implies that some households may receive a smaller budget than what they usually spend on food (i.e., they are budget-constrained) and some households may receive more than usual (i.e., less budgetary constraints). Preliminary analysis indicates that households in rural districts tend to reduce consumption of meat-based dishes when faced with budgetary constraints, which was more prominently observed in the case of lunches and dinners.

In the behavioral experiment, a 20-minute video featuring a local celebrity nutritionist delivering a behavioral change communication (BCC) lesson on healthy diets was broadcasted to some randomly selected participants, while other participants were not exposed to the BCC. The weekly food choice portfolios constructed by the households through the FCA were converted to nutritional outcomes. The team is currently assessing under which conditions BCC can successfully nudge Indian households towards healthier food choices under varying budget constraints. 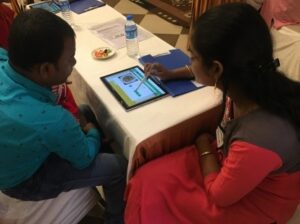 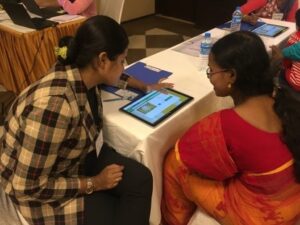 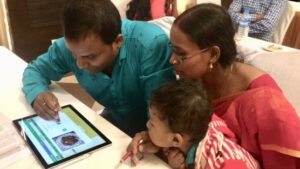 Individual rounds where husband (top left photo) and wife (top right photo) administer the FCA individually and together in the joint round (bottom left photo).

The FCA is an innovative and realistic method that helps researchers better understand the complexity of food choice. Almost all households agreed that the FCA correctly captured the real food choices they face in everyday life. The FCA enables testing several potential entry points for nutrition-sensitive interventions (e.g., at ingredient, dish, and meal occasion level). Using the FCA alongside the expert elicitation workshops and household surveys has substantially strengthened the understanding of the drivers of food choice in eastern India. Conducting behavioral experiments using a digital technology tool like FCA sheds light on how consumers choose their food and the consumption tradeoffs they make under a wide range of budgetary constraints.

Ultimately, the findings from this project will provide policy makers and public health practitioners with an in-depth understanding of the complex decision-making processes around food that emphasize the role of sociocultural and behavioral norms. This evidence will support the development of targeted nutrition-sensitive programs to promote healthier diets among low- and middle-income households in eastern India.

The FCA will be available to demo at the DFC Competitive Grants Program table at the ANH Academy Week Annual Meeting, 24-28 June 2019, in Hyderabad, India. Stop by and check it out!

This research has been funded by the Drivers of Food Choice (DFC) Competitive Grants Program, which is funded by the UK Government’s Department for International Development and the Bill & Melinda Gates Foundation, and managed by the University of South Carolina, Arnold School of Public Health, USA.

Krystal Rampalli, MPH, is a Ph.D. student in Health Promotion, Education, and Behavior at the University of South Carolina’s Arnold School of Public Health. She is a Research Assistant for the Drivers of Food Choice Competitive Grants Program.

Claire Custodio, MBA, is an Associate Scientist on Consumer Research at the International Rice Research Institute (IRRI) and a Ph.D. student at the University of the Philippines, Los Baños.