As part of the Drivers of Food Choice (DFC) Competitive Grants Programme, an international team of researchers in Ghana, the UK and France launched their 2 year project to investigate what drives unhealthy dietary changes in Ghana in January 2017.

The pioneering project will investigate dietary transitions in Ghana which, like many other African countries, is currently experiencing rapid change partly driven by increasing migration to cities. Diets are changing globally and dietary transition is now happening in most cities of the global south, including countries in Africa, Central and Latin America and Asia, where people’s habits are changing from a traditional plant-based diet – which are healthier – to a diet that is high in processed, energy dense convenience foods, rich in fat and sugar, but poor in nutrients.

These changes have resulted in people having unhealthier diets in cities, but there is limited understanding of the factors that drive dietary change – particularly the role that social environments play, such as family or friends, or the neighbourhoods that individuals live in, and their access to healthy food. It is important to understand these factors in order to prevent diseases such as obesity, cardiovascular disease and type 2 diabetes.

The project will undertake novel approaches for collecting data on food consumption and practices, and the factors driving them. The different approaches will include collecting the views of communities and stakeholders in identifying solutions to the problem of eating unhealthy diets. We will be interviewing women and adolescent girls about what kinds of food they eat by using photography to illustrate the factors that influence these decisions.

We will also be mapping the food environment in people’s neighbourhoods to explore how features of the environment might influence people’s diets to help us identify interventions with local experts and policy makers that could be effective in improving diets and maintaining traditional dietary habits.

The Principal investigators for the study are:

–      Professor Michelle Holdsworth, from the University of Sheffield, UK.

–      Dr Amos Laar, University of Ghana- lead for the study in Accra.

–      Dr Francis Zotor, University of Health and Allied Sciences- lead for the study in the Ghanaian city of Ho.

The co-investigators for the project are:

A scene of a food market in Accra, January 2017 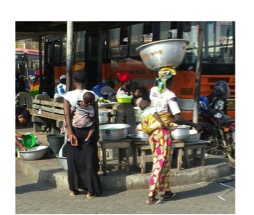