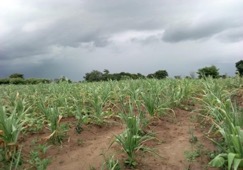 Dr. Helen Walls (London School of Hygiene and Tropical Medicine) is currently leading a research project in Malawi, titled: Do agricultural input subsidies on staples reduce dietary diversity”. The aim of this work is to examine the impact of Malawi’s agricultural input subsidy program, the Farm Input Subsidy Program (FISP), on overall food choices, by examining not just price and consumption of maize but crucially the effects of FISP on consumption of other foods. It will also explore the wider context of FISP policy implementation, food preferences and trade-offs.

This study was done in two districts of Malawi: Lilongwe (central Malawi) and Phalombe (southern Malawi). We had training for about a week before we left for the field and whilst in Zomba for training we also did some piloting of the project. There were three tools for data collection namely: the household questionnaire, the tool for conducting focus group discussions, and the discrete choice experiment questionnaire. I was part of the Lilongwe team, and it was quite an interesting experience. I learnt a lot through this project and we collected the data that we wanted. We collected data in four enumeration areas (EAs) in Lilongwe District, from a total of 200 households.

Dr. Helen Walls, myself and other team members Jones and Arthur in the field.

I will focus mainly on the issue of food insecurity because I noticed that it has seriously affected quite a lot of areas in rural Malawi and most especially the areas in which this study took place. This study through the household questionnaire made me realize that there are several main factors that are common in most households, some of which are: lack of funds to purchase food, increase in food prices and decline in own-food production just to mention a few. With decline in own-food production, I discovered that most areas are experiencing a shortage of rainfall which as a result leads to people harvesting little food or no food at all. I also noticed in the fields, the maize had wilted because of too much sun with no hope of surviving even if rains came. It is really sad because it means that most households will have little or no food at all this year since maize is a staple food in Malawi.

During the process of data collection using the household questionnaire, I noticed that most families had been eating 1-2 times per day. Based on questions I asked relating to the previous month to the day I was conducting the interview, I found that most families had been eating maize porridge with no sugar, just salt or no salt at all in the morning, and nsima and mostly pumpkin leaves with just salt or no salt at all either in the afternoon or in the evening. I also noticed that these families didn’t actually have enough maize to last them even a week and they also didn’t have money to buy more food. I will tell the  story that touched me the most during this work, about a certain lady who had four kids but had not eaten in three days. This is in fact a typical example of how serious the issue of hunger is in Malawi.

After I reached this particular household and obtained consent to conduct the interview, this woman told me that she is a single mother of four children. For survival, this lady does piece works in people’s fields to earn money which is very little, about a dollar or less per job to be able to buy food for her home, and during the past month or so she had not found any job. From the household questionnaire, when I asked her about the number of meals she had per day over the past week, she said it’s always one meal per day when they find food. She then told me that her family had not eaten any meal for the past three days. No other food items were usually available in the house, other than perhaps a little maize flour for porridge without salt. When I started asking questions about the last time they ate a particular food item for example chicken, milk, eggs, rice etc., the lady paused and told me that I was not being fair to her for asking about some things she hadn’t eaten in weeks, some in months and others in more than a year and also said that at the time I was interviewing her, she was so hungry. I felt really bad and then asked her if she could allow me to stop the interview. She humbly said no, we could continue. We then proceeded with the interview to the end. After the interview I thanked her for giving me the opportunity to interview her and gave her some tablets of washing soap. She almost knelt down, thanking me for the soap and she said she was going to sell the soap so that she could buy something to eat. It was very touching. This woman’s situation is also just an example of so many households in rural Malawi that are food insecure.

In conclusion, it was a very nice experience being in the field, I learnt quite a lot of things and I met new people. But above all, personally, I think this study was very important in that it was examining the impact of Malawi’s Farm Input Subsidy (FISP) on overall food choices and dietary diversity, and it made us the research team realize how serious the issue of food insecurity has affected most households in rural Malawi.